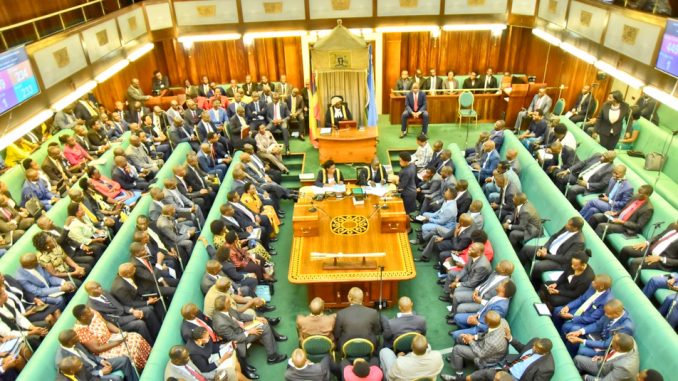 In 2014, the now infamous Anti-Homosexuality Act, passed by the Parliament of Uganda, came into force. The aim of the Act was to prohibit any form of sexual relations between persons of the same sex and to curtail the so-called ‘promotion’ and recognition of same sex relationships.

Since 2014, support for another anti-gay law has intensified in the Parliament. Although Ugandan criminal law already prohibits all same sex sexual acts committed in private between consenting adults, parliamentarians consistently claim that a new law is necessarily to criminalize those who abet, procure, promote and finance ‘homosexual activities’.

Along with my colleague, Dr Silvia Falcetta, at the University of York, I have carried out research on activity in the Ugandan Parliament relating to homosexuality from 2014 to the present time.

The findings of our research are very worrying because they show that homophobic hatred in the Ugandan Parliament is at such extreme levels that it resembles expressions of homophobia found in totalitarian regimes, such as the former Nazi Germany.

Our research shows that, since September 2014, homosexuality has been debated in the Ugandan Parliament on at least 47 sitting days. This is a staggeringly large amount of parliamentary time given over to this subject.

What is particularly concerning about all parliamentary debates is the routine way in which parliamentarians claim that homosexuality is devoid of any value – for example, by calling it ‘unacceptable, unthinkable, unwarranted, [and] uncalled for’ – and that this is never challenged.

Since 2014, Ugandan parliamentarians have repeatedly made groundless, hateful claims about gay men and lesbians. For example, parliamentarians have claimed that homosexuality is ‘sexual terrorism and violence’ and because of it ‘there will be no children and we will see the end of the world sooner’. They have also claimed that homosexuality poses serious medical dangers to individuals, leaving them ‘passing stool uncontrollably’ and, consequently, having to wear ‘pampers’.

Listening to Ugandan parliamentarians talk about homosexuality brings to mind Nazis, such as Heinrich Himmler, who, in 1936, described homosexuals as a ‘serious danger to population policy and public health’.

Although many of the claims made about gay people in the Parliament – for example, that they are unnatural, inhuman and dangerous – may seem hackneyed, discredited or just plain stupid, such claims have widespread support.

And crucially, when such claims are made in the Parliament, not one single person ever speaks out against them.

Imperialism and the promotion of homosexuality

Parliamentarians in Uganda repeatedly claim that homosexuality is being actively ‘promoted’ by foreigners. The promotion of homosexuality constitutes, it is claimed, a ‘relentless and unprecedented attack’ upon Uganda that all Ugandans ‘need to find a way of fighting’.

Homosexuals, it is commonly claimed, are ‘infiltrating the country’ and attempting to destroy both Ugandan and African ‘traditions’ and ‘values’. Homosexuality, parliamentarians argue, is spreading ‘like paraffin’and is ‘eating up Uganda’ through ‘mass recruitment’ by homosexuals who ‘have invaded Africa’ in order to ‘target’ and ‘intoxicate’ the ‘young generation’.

The ‘goal’ of Western countries that promote homosexuality in Uganda is, it has been claimed, to achieve ‘a situation where Uganda is dominated, exploited, oppressed and occupied’. Homosexuality is, therefore, claimed to be part of a broader Western campaign of ‘exploitation, oppression as well as imperialism’.

The idea that homosexuality is a mechanism by which one or multiple nations can conquer another nation is a variation of a story that has often been told from time-to-time and place-to-place. For example, in Britain during the final year of the First World War there was a widely held belief that the German Secret Service were in possession of a list of British men and women who were gay, and were engaged in blackmailing them. These British men and women were known to the Germans, it was believed, because of reports of German agents who were said to have infested Britain for twenty years in order to spread debauchery.

The claim made by some Ugandan parliamentarians, that there is a ‘fast spreading foreign culture of homosexuality’ in Uganda, can therefore be seen as a variation of a homophobic story that has been told about ‘invasive’ and ‘foreign’ homosexuality in many countries around the world.

There is now no opposition to the outpourings of extreme homophobia that are a standard and consistent aspect of parliamentary debate in Uganda. No Member of Parliament since September 2014 has publically spoken against any homophobic argument or claim made in plenary debates.

The apparent solidarity among parliamentarians regarding homosexuality strongly suggests that, at some point in the future, an attempt will be made to re-enact the Anti-Homosexuality Act. There may also be an attempt to include provisions that are even more draconian than those contained in the original Act, such as introducing the death penalty for particular same-sex sexual acts.

The lack of any critical voices in the Parliament provides those who wish to pursue their fervent desire to increase the regulation of homosexuality with a strong platform on which to campaign for the most wide-ranging legislation.

The solution must come from Members of Parliament

The history of the development of sexual orientation equality in other jurisdictions shows that some parliamentarians must find the courage, if the scourge of homophobia is to be eradicated, to challenge expressions of homophobia in the Parliament and articulate the interests of gay and lesbian Ugandans.

There will undoubtedly be Members of the Ugandan Parliament who are gay, or who have gay family members, and who fundamentally disagree with the dominant homophobic discourse in the Parliament. It is crucial that those parliamentarians be afforded support, both domestically and internationally, to find ways to speak out against the homophobic ideas articulated by their peers.

The article “Beyond the Anti-Homosexuality Act: Homosexuality and the Parliament of Uganda”, which reports the research discussed here, can be downloaded free of charge here:
https://papers.ssrn.com/sol3/papers.cfm?abstract_id=3375368