The European Court of Human Rights says 'you' have the right to marry, but this clearly doesn't extend to same-sex couples 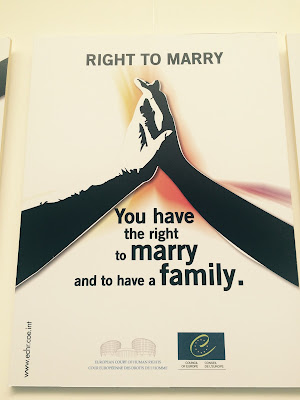 If you are someone who would like to marry a person of the same legal sex as yourself, and live in a Council of Europe state that does not permit this, you will be delighted to learn that the European Court of Human Rights has now said that 'You have the right to marry and to have a family'. This statement was made by the Court on a poster, displayed in its Press Room last Friday (which was photographed by Jens Theilen and Annelie Siemsen - for which, many thanks).

However, those who know the Court's jurisprudence on same-sex marriage may be surprised that it has issued this poster. This is because, the Court has been consistently clear that the 'right to marry' enshrined in Article 12 of the European Convention on Human Rights (which guarantees this right to 'men and women') does not extend to same-sex couples.

Given the Court's clear position on same-sex marriage what, therefore, is the explanation for this poster? My first reaction to it - which was one of incredulity - was to think about who the author of the poster considered to be its audience: that is, who the author imagined to be the 'you' that the poster is addressing. I wondered whether the author had in mind only opposite-sex couples when formulating the text, since clearly the use of 'you' would be correct in this context? If so, sociologists would call this a 'heteronormative' poster, insofar as it presupposes that those standing in front of it are heterosexual.

I shared this poster with a few colleagues and, given that they are a light-hearted bunch, they reacted by suggesting that the Court might issue a revised version with different wording, such as:

"Some of you have the right to marry..."

Whilst this is amusing, I must confess to being quite disturbed by the Court issuing a poster that contains this text. For the millions of people in Council of Europe states who passionately believe that same-sex couples should have the human right to marry, and who respectfully try to engage with the Court's on-going jurisprudence in this area, this poster is something of a 'kick in the teeth'. Reading the Court's judgments year after year which exclude same-sex couples from the right to marry is one thing, but trite posters which fail to even recognise the issue is another thing.

There are millions of people across Europe who are living in countries where they remain persecuted for desiring the basic human right to love. That right, crystallised in 1950 in the Convention's right to marry, is currently denied to them. The Court is currently not on their side. As such, the Court should not add insult to injury by issuing posters like this.