18 year anniversary of "gays in the military" ECHR judgments 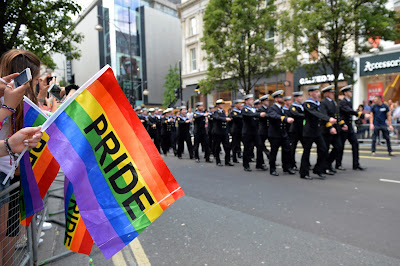 Young people joining the UK armed forces today may know little or nothing of the time when being gay in the British Army, Royal Air Force, or Royal Navy and Marines could have led to a term of imprisonment and/or discharge.


The acceptance of lesbians and gay men in the UK armed forces is largely the result of ground-breaking judgments handed down by the European Court of Human Rights 18 years ago this month.

The judgments in Lustig-Prean and Beckett v the United Kingdom and Smith and Grady v the United Kingdom responded to complaints by four gay applicants - John Beckett, Graeme Grady, Duncan Lustig-Prean, and Jeanette Smith - about their treatment by the armed forces after they had been reported to and investigated by ‘service police’ in relation to their sexual orientation. All four endured extensive and intrusive investigations and were subsequently administratively discharged (sacked) because of their sexual orientation.

These cases were not the first time that gay service personnel had gone to Strasbourg with a complaint about sexual orientation discrimination.

The first person to take such a complaint was the applicant in B. v the United Kingdom, a male non-commissioned officer who had served in the British Army for eight years. He complained about his conviction for consensual homosexual acts committed in private on separate occasions with a gunner in his regiment and a civilian. The applicant, who had an exemplary military record, was convicted of ‘disgraceful conduct of a cruel, indecent or unnatural kind’ and was sentenced to a reduction in rank and to nine months’ imprisonment with corrective military training, followed by dishonourable discharge.

The former European Commission of Human Rights responded to this complaint in 1983 by dismissing it on the basis that the ‘court-marital and dismissal from the service can be considered “necessary in a democratic society” for the “protection of morals” and also “for the prevention of disorder” in the context of military service’.

In 1991, the House of Commons Select Committee responsible for scrutinising the quinquennial Armed Forces Bill recommended that ‘homosexual activity of a kind that is legal in civilian law should not constitute an offence under Service law’. In reaching that conclusion, the Committee took evidence from, among others, a founding member of Stonewall, Michael Cashman (now Lord Cashman), and co-founder of Rank Outsiders, Robert Ely. As a consequence of the Select Committee’s recommendation, male homosexual acts were partially ‘decriminalized’ in the armed forces in 1994.

However, regardless of the legislative change in 1994, gay men and lesbians could still be discharged from the armed forces for the mere fact of being gay. This was happening at an astounding rate: by my estimation, between the mid 1980s and 1990s, six service personnel were on average discharged from the armed forces per month for the sole reason that they were gay.

When John Beckett, Graeme Grady, Duncan Lustig-Prean, and Jeanette Smith went to Strasbourg they did so with the ambition of challenging the legality of their discharge from the armed forces and their treatment during the course of this discharge.

The judgments in Smith and Grady and Lustig-Prean and Beckett marked a sea change in the Court’s conceptualization of homosexuality. They demonstrated a significant absence of the view, once hegemonic in the former Commission, that homosexual men and homosexual sexual practices represented a social danger that justified their containment and suppression.

The Court stated that it regarded the interference with the applicants’ right to respect for their private lives as ‘especially grave’ for a number of reasons. First, the investigation process ‘was of an exceptionally intrusive character’, carried out according to methods based on criminal procedures, and sometimes involving a range of individuals associated with the applicants. For example, Ms Smith’s partner, Margaret Fleming, who was not a member of the armed forces, was interviewed and asked, inter alia, ‘what sexual acts she and her partner performed and whether she and her partner had had sex with their foster daughter’. Secondly, the discharge of the applicants had a ‘profound effect on their careers and prospects’. Thirdly, the policy under which the applicants were discharged was of an ‘absolute and general character’, which operated ‘irrespective of the individual’s conduct or service record’.

As a result of the Court upholding the applicants' complaints in September 1999, the UK government announced in January 2000 that ‘homosexuality will no longer be a bar to service in Britain’s armed forces’. Subsequent to this, the Court upheld complaints lodged by several other gay and lesbian service personnel who had been administratively discharged because of their sexual orientation. These included judgments in Perkins and R. v the United Kingdom and Beck, Copp and Bazeley v the United Kingdom.

Recent legislative developments show just how far the UK Parliament has come in respect of gay men and lesbians serving in the armed forces.

In 2016, Parliament took the step of repealing the final piece of anti-gay law relating to the armed forces. I described that process at the time in the Huffington Post; a process in which Duncan Lustig-Prean, of Lustig-Prean and Beckett v the United Kingdom, played an instrumental role.

This year, as part of the legislation that granted posthumous pardons to those persons previously convicted or cautioned for now-repealed (homo)sexual offences, Parliament extended pardons to those convicted of specific service offences. As a result of interventions made by Lord Lexden, these pardons extend back as far as 1661 (the year that 'An Act for the regulation and better government of the navy' stated that if 'any person or persons in or belonging to the Fleet, shall commit the unnatural and detestable Sin of Buggery or Sodomy' they 'shall be punished with death, without mercy').

The late, great James Baldwin said: "History is not the past. It is the present. We carry our history with us. We are our history. If we pretend otherwise, we literally are criminals."

As part of ensuring that this recent history of change in the armed forces remains with us, my small contribution has been to assemble oral histories by some of those who went to Strasbourg with complaints about discrimination.

18 years after the judgments in Smith and Grady and Lustig-Prean and Beckett, we can reflect on and give thanks for the tremendous sacrifices and brave deeds of those people who actively changed the legal landscape of the UK and made it possible for gay men and lesbians to serve in the UK armed forces without the fear of institutional persecution.