In an article to be published in the next issue of the Journal of Immigration, Asylum and Nationality Law, Silvia Falcetta and I examine the ways in which the European Court of Human Rights has developed the protection of sexual minorities under the Convention in respect of two aspects of migration: "residency" and "asylum".

In the article, we consider a number of issues that have been addressed by the Court, such as the extent to which bi-national same-sex couples should have the right to remain together in a Council of Europe member state, and the protection that should be extended to gay and lesbian asylum seekers attempting to resist repatriation to a country where they would not be free to establish a sexual relationship with a same-sex partner.

We show how the Court has developed a "two track" system in which it adopts a dynamic interpretation of the Convention in respect of residency - which has lead to the development of rights for bi-national same-sex couples to live together in Council of Europe states where one of the couple is a national - but a conservative interpretation of the Convention in respect of gay and lesbian asylum seekers who want to live in a Council of Europe state to avoid discrimination in their country of origin.

To date, the Court has never upheld an application lodged by a gay man or lesbian alleging that their repatriation to a country of origin would be in violation of the Convention because they would be subject to discrimination and ill-treatment on the grounds of their sexual orientation. 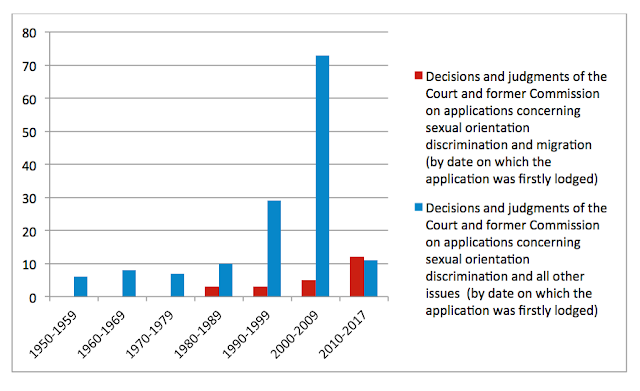 We argue that the Court's current approach to complaints made by gay and lesbian asylum seekers is problematic because, not only is it inconsistent with the Court’s general principles on asylum, it systematically fails to protect gay men and lesbians from having to live in circumstances where they would have no opportunity to establish a private and family life.

"Migration, Sexual Orientation, and the European Convention on Human Rights"
by Silvia Falcetta and Paul Johnson
is published in the next issue of the
Journal of Immigration, Asylum and Nationality Law.