Here is my annual round-up of cases concerning sexual orientation discrimination that were considered by the European Court of Human Rights in 2016.

This was a significant year, in many ways, which saw the Court issue some important judgments that enhance its existing LGBT jurisprudence. However, it was also a year in which the Court issued judgments that continue its established refusal to extend to same-sex couples the human right to marry...

In January, the Court declared the complaint in Pshenkina v Sweden, which concerned the refusal to permit the same-sex partner of a prisoner to visit in order to marry, inadmissible on the grounds that the applicant had not exhausted domestic remedies. The Court also issued its judgment in Kostadinov v Bulgaria, upholding a complaint about the role of police in maintaining public order during a "gay pride" event.

In February, the Court issued its judgment in Pajić v Croatia, upholding a complaint about sexual orientation discrimination in immigration law.

In April, the Court held in Sousa Goucha v Portugal that a homophobic joke did not violate the Convention. It also held in M.C. and A.C. v Romania that the failure of police to take into account discriminatory motives when investigating a homophobic attack amounted to a violation of Article 3 (procedural limb) taken in conjunction with Article 14 of the Convention.

In May, the Court, in A.N. v France, once again rejected an application by a gay asylum seeker, thus continuing its established approach in respect of complaints by gay men and lesbians about Council of Europe States that seek to return them to States outside of Europe that criminalise homosexual acts.

In June, the Court, in Chapin and Charpentier v France, restated its established opinion that denying a same-sex couple access to marriage does not violate the Convention. The Court also held, in Aldeguer Tomás v Spain, that a surviving same-sex partner who was denied access to survivor’s pension was not discriminated against. But, at the end of the month, in Taddeucci and McCall v Italy, the Court held that Italy had violated the Convention by refusing a residence permit to a same-sex partner.

In July, in O.M. v Hungary, the Court held that the conditions of detention to which a gay asylum seeker was subjected amounted to a violation of the Convention.

And in November, the court held, in Kaos GL v Turkey, that the seizure of copies of a magazine promoting LGBT rights in Turkey breached Article 10 of the Convention.

"Judges of the Year"

Apologies for this tabloid turn, but I want to pay tribute to Judges Spano and Bianku who this year, in their concurring opinion in Taddeucci and McCall v Italy, made some striking statements about same-sex couples, marriage and family life.

Specifically, Judges Spano and Bianku spoke of the Court being a "sanctuary" for same-sex couples when they are denied access by States to the family life rights available to opposite-sex couples. Such a plain statement from judges in the Court is heartening, encouraging and most welcome.

In the time since I began this blog in February 2013, the stats page has recorded a total of 132,711 page views. The worldwide readership of the blog, from Aruba to United Arab Emirates, has improved my worldwide geography no end. Here is a list of the top ten countries by page views of all time: 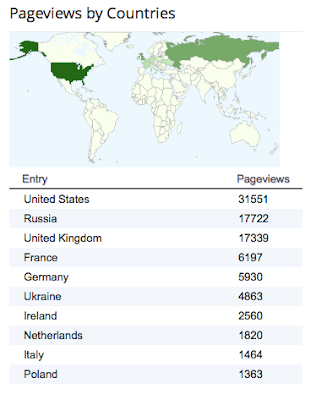 Thanks and Happy New Year

I want to thank everyone who has read this blog over the year for their interest. Many thanks to those of you who have written to me personally. Special thanks to Dr. Loveday Hodson for her excellent Guest Post on Pajić v Croatia.

I wish you all a very happy, a very peaceful, and a very prosperous 2017.