How far can one criticise the European Court of Human Rights and its judges? 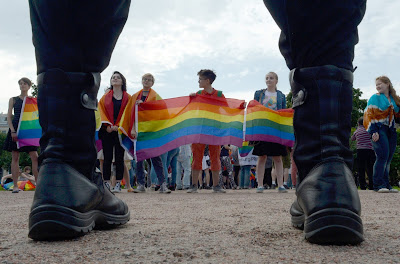 On 16 July 2019, the former Third Section of the European Court of Human Rights issued its judgment in Zhdanov and Others v Russia, holding that the Russian authorities had violated the applicants' rights under Article 11, and Article 14 in conjunction with Article 11, of the Convention.

The judgment is significant in upholding the complaints of Russian nationals and Russian non-profit organisations who alleged that the refusal to register associations set up to promote and protect the rights of LGBT people in Russia had violated their right to freedom of association and had amounted to discrimination on grounds of sexual orientation.

However, one aspect of the case is particularly interesting, and it concerns the behaviour of one of the applicants, Mr Nikolay Alekseyev.

Mr Alekseyev was the applicant in two of the applications that made up this case.

The Russian government submitted to the Court that Mr Alekseyev had abused the right of individual application by insulting the judges of the Court on his social networking accounts.


The government informed the Court that after the delivery of its judgment in a previous case concerning Mr Alekseyev (Alekseyev and Others v Russia, nos. 14988/09 and 50 others, 27 November 2018) he, frustrated by the outcome, had published insulting comments about the Court and its judges on his Instagram and VKontakte social networking accounts.

What Mr Alekseyev did

What the Court found, it claimed, were statements about the Court and its judges that are "virulently and personally offensive and threatening".

Examples of this are given as Mr Alekseyev having published the judges’ photographs with such captions as “alcoholic”, “drug addict”, “corrupt”, and “this crone owes me 100,000 euros ... God will punish her”.

Mr Alekseyev is also said to have called the judges, among other terms, “European bastards and degenerates”, “freaks”, “venal scum” and “idiotic”.

He is said to have wished that the judges would “snuff it as soon as possible like dogs”, threatened to “torture [them] ... with litres of vodka” and announced that “it [was] time to set fire to the European Court of Human Rights”. He also stated: “We should not have given wenches the right to vote ... They should be cooking soup”.

The Court's interpretation of these statements is that they were designed to "ensure the widest possible circulation of his accusations and insults" and were evidence of Mr Alekseyev's "determination to harm and tarnish the image and reputation of the institution of the European Court of Human Rights and its members".

Having found the internet posts, the Court sent a letter to Mr Alekseyev referring to all his pending applications and warning him that such statements might amount to an abuse of the right of petition.

Mr Alekseyev did not however withdrawn his statements which are, apparently, still visible on his social networking accounts.

The Court stated that Mr Alekseyev has since published new offensive statements about the Court, in particular describing it as “a rubbish heap” and calling its judges “European corrupt scum” and “homophobic”.

The Court therefore concluded that these "statements published after the warning that explicitly mentioned the present applications can therefore be considered to be connected with them".

The Court decided that by continuing to publish insults about the Court and its judges after the warning, Mr Alekseyev had "shown disrespect to the very institution to which he had applied for the protection of his rights".

Furthermore, the Court stated that "it is unacceptable [for Mr Alekseyev] to seek the protection of a court in which [he] has lost all trust".

Quoting from its case law, the Court held that Mr Alekseyev's conduct constitutes “a vexing manifestation of irresponsibility and a frivolous attitude towards the Court”, amounting to contempt, and is therefore contrary to the purpose of the right of individual application, as provided for in Articles 34 and 35 of the Convention.

Mr Alekseyev had therefore abused the right of application within the meaning of Article 35 § 3 (a) of the Convention.

Judges Keller, Serghides, and Elósegui lodged a strong dissenting opinion against the conclusions of the majority on the grounds that they did not believe that Mr Alekseyev’s conduct jeopardised the integrity of the Court in this case. In essence, they argued that the comments made by Mr Alekseyev were not sufficiently connected to the case under consideration.

Judges Keller, Serghides, and Elósegui also expressed concern about free speech, noting that judgments and decisions of the Court are weighty and often controversial and, as such, generate public discussion. Therefore, they stated, "the Court should be extremely careful not to set a precedent that could have a chilling effect on the active engagement of the public with the Court".

These judges express the concern that the Court could be "appearing to retaliate against the applicant’s offensive remarks" and that "the public should not be given the impression that the Court is engaging in revenge instead of delivering justice".

Judges Keller, Serghides, and Elósegui argued that the Court "exists to protect and realise" the right of individual application "for all applicants, regardless of their manners or propriety. Taking this right away from an applicant altogether should be done only in the most exceptional circumstances".

They proposed that "the Court should have considered [sending] the applicant an official letter with a clear indication that if he does not retract his false and derogatory comments about individual judges, his applications will no longer be dealt with in the future".

Was the Court right to take the approach it did?

Is it appropriate, then, for the Court to discover such statements and conclude that the level of "disrespect" they contain and the lack of "trust" that they show mean that Mr Alekseyev cannot seek the protection of the Court?

Some people may be astonished, and deeply worried, that the Court - the self-styled Conscience of Europe - feels able to turn away someone on the grounds that they write things on social media that express a lack of "trust" in the Court.

Exactly how much lack of "trust" is a person allowed to express in the Court before the Court declares this an abuse of the right of individual application?

I will be thinking about this in the run up to giving a talk in Belfast on Thursday, where I plan to talk about popularism and the Court. The thrust of my talk will be that European governments and populations often react very negatively to the Court's judgments and, in doing so, seek to attack the legitimacy of the Court. This creates an environment in which the Court is asked to only issue judgments that the public can stomach. This is contrary to the Court's mission and therefore, I would argue, European governments have a moral responsibility to foster acceptance of the Court and its judgments, however unpopular these may be. But the Court also has its role to play. It must strive towards issuing judgments that best realize human rights protections in Europe. In doing so, in the face of almost constant "abuse" from individuals and governments alike, the Court must always be "the bigger person" in the pursuit of justice. Some might say that, in this case, the Court didn't fulfill that role and, as a consequence, has diminished its status.

Postscript
For further thoughts on this case, see here:
https://echrso.blogspot.com/2019/08/thoughts-on-recent-decision-by-european.html