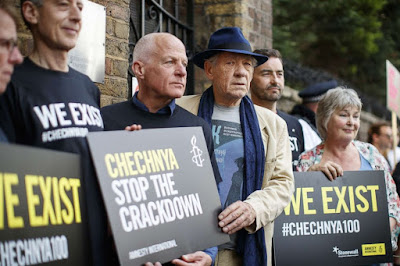 The Third Section of the European Court of Human Rights has communicated the case of Lapunov v Russia, which concerns allegation of serious ill-treatment of a gay man during the reported large-scale campaign of persecution against LGBTI people in Chechnya, Russia, in 2017.

The applicant, Mr Lapunov, alleges that he was detained by the police and subjected to systematic torture solely because of his sexual orientation.

The Russian authorities, who subsequently considered the allegations, concluded that there was insufficient evidence to support Mr Lapunov's claims and did not open a criminal investigation.

Given the disputed facts, the first question the Court is asking the parties is: was Mr Lapunov subjected to the ill-treatment he alleges? To answer this question, there are various pieces of evidence in play, including medical examinations, lie-detector tests, and witnesses.

Establishing whether Mr Lapunov was subjected to the ill-treatment he alleges is key because, if the Court decides that he was, it is unlikely it would reach any other conclusion that Mr Lapunov has suffered a violation of his Convention rights, most significantly in respect of Article 3 of the Convention (prohibition of torture).

The Court will also consider whether the Russian authorities' decision not to open a criminal investigation amounted to a violation of the Convention.

The facts are fairly complex and, for this reason, I have copied them verbatim from the Court's file (although references to "2012" in the file appear to be errors, and should probably be read as "2017").

It is worth reading closely the facts relating to why the Russian authorities decided not to open a criminal investigation into the allegations made by Mr Lapunov and to question how plausible these are...

STATEMENT OF FACTS
1.  The applicant, Mr Maksim Grigoryevich Lapunov, is a Russian national, who was born in 1987 and lived in Omsk and Perm Regions, Russia. After the events described below he left the country. He is represented before the Court by Ms O. Sadovskaya, a lawyer practising in the town of Nizhniy Novgorod.

A.   The circumstances of the case
2.  The facts of the case, as submitted by the applicant, may be summarised as follows.

1.   Background
3.  The applicant is a homosexual person, who is open about his sexual orientation. When he moved to Chechnya in 2015 he did not hide his sexual identity or mentioned it without necessity. He had an event organisation business and sold party balloons in the town of Grozny.
4.  According to media reports, including the Russian newspaper Novaya Gazeta, in February-March 2017 a large-scale campaign of persecution against LGBTI started in Chechnya.

2.   Arrest of the applicant’s acquaintance and his subsequent release from detention
5.  At 8 a.m. on 6 March 2017 the applicant met his acquaintance, Mr E.Ts. Together they went to the applicant’s flat in the block of flats and stayed there until 10 p.m., when Mr E.Ts received a message via a social network and left the place. One minute later the applicant heard a scream from the street. Ten or fifteen minutes later he spoke with a neighbour, who said that unknown persons had apprehended Mr E.Ts. and forced him into a black Lada Priora car escorted by another car of the same model. Immediately thereafter the applicant telephoned Mr E.Ts., but the latter did not answer the call. Then the applicant reported the incident to a local police station.
6.  At 00.30 a.m. on 7 March 2017 a man in a camouflage uniform with captain’s shoulder straps arrived at the applicant’s flat. The man identified himself as an investigator from the Leninskiy district police station and questioned the applicant, who provided him with the details of the aforementioned incident.
7.  On 12 March 2012 one of Mr E.Ts.’s brothers told the applicant that Mr E.Ts. had been arrested and then released from detention with traces of beatings on his body. At the relevant time Mr E.Ts. was at his home. His brother asked the applicant to cease any contacts with Mr E.Ts.

4.   Search for the applicant
30.  On 23 March 2017 the applicant’s sister reported her brother’s disappearance to the Chechnya Ministry of the Interior. Mr S. was the investigator responsible for the case. According to him, on 25 March 2017 the applicant’s whereabouts had been established and he was taken to the Ministry of the Interior to give written explanations. The latter submitted that his mobile telephone had been out of order, he was busy with work and therefore he had not called his family. On the grounds of the above explanation the investigating authority issued a decision not to open a criminal case on 17 April 2017.

6.   Appeal against the decision not to open a criminal case
60.  On an unspecified date the applicant appealed against the investigator’s decision not to open a criminal case. He alleged that the investigator had failed to take basic investigative steps, in particular, to attach photographs of the applicant’s injuries to the case file; to question witnesses who had seen them; to obtain from the mobile service operator information about the location of the applicant’s mobile telephone between 16 and 28 March 2017; to question Mr A.K. or officers who had been on duty at the entrance checkpoint of the Ministry of the Interior on 16 April 2017. The applicant stressed that the important investigative measures such as identification parade, witness cross-examination and others could have been carried out only in the context of an opened criminal investigation.
61.  On 22 August 2018 the Essentuki Town Court dismissed the applicant’s claim. It found that the investigator had carried out a thorough inquiry into the applicant’s allegations and delivered a lawful decision within his competence.
62.  On 12 September 2018 the applicant challenged the above decision on appeal before the Stavropol Regional Court, which dismissed his appeal on 26 November 2018 endorsing the finding of the lower court.

B.   Relevant domestic and international material
1.   Domestic law
63.  For the relevant provisions of domestic law regarding the prohibition of ill-treatment and procedure for examining a criminal complaint see Lyapin v. Russia, no. 46956/09, § 96-102, 24 July 2014.

2.  Documents by the Parliamentary Assembly and the Committee of Ministers of the Council of Europe
64.              On 27 June 2018 the Parliamentary Assembly of the Council of Europe adopted Resolution 2230 (2018) “Persecution of LGBTI people in the Chechen Republic (Russian Federation)” which reads in the relevant part as follows:
“7. In the light of these considerations, the Assembly urges the Russian Federation to:
7.1. conduct an impartial and effective investigation into the persecution of LGBTI people in the Chechen Republic and ensure there will be no impunity for the perpetrators;
7.2. allow an independent international investigation by an international human rights organisation, should an investigation at national level not be pursued;
7.3. ensure the legal and physical protection of victims, their family members and witnesses of persecution of LGBTI people in the Chechen Republic;
7.4. implement the judgment of the European Court of Human Rights (the Court) in the case of Bayev and Others v. Russia and other relevant judgments, and repeal, as recommended by the Court, the law prohibiting the so-called promotion of non‑traditional sexual relationships among minors, which has contributed to reinforcing an overall climate of discrimination and prejudice against LGBTI people;
7.5. ensure the protection of human rights defenders throughout the country, including those working on the promotion and protection of the rights of LGBTI people;
7.6. authorise the publication of the report of the visit made by the European Committee for the Prevention of Torture and Inhuman or Degrading Treatment or Punishment (CPT) to the Chechen Republic in December 2017 and implement its recommendations without delay;
7.7. fully implement the recommendations of the European Commission against Racism and Intolerance (ECRI) in the context of its 5th monitoring cycle;
7.8. provide full support to the review process of Committee of Ministers Recommendation CM/Rec(2010)5 on measures to combat discrimination on grounds of sexual orientation or gender identity.”
65.  On 27 June 2018 the Parliamentary Assembly of the Council of Europe also adopted Recommendation 2138 (2018) which reads in its relevant part as follows:
“2. ... the Assembly recommends that the Committee of Ministers:
2.1. call on the Russian Federation to comply with the recommendations laid down in Assembly Resolution 2230 (2018);
2.2. in the event of the Russian Federation failing to conduct an investigation within a reasonable lapse of time, consider launching a Council of Europe investigation into the campaign of persecution against LGBTI people which took place in 2017 in the Chechen Republic.”
66.  On 9 January 2019 the Committee of Ministers at its 1333rd meeting adopted a reply to the above recommendation. In it relevant part it reads as follows:
“4. The Committee of Ministers notes with concern that hate crimes targeting LGBTI persons continue to be committed in Council of Europe member States. It points out that, in accordance with the requirements of the European Convention on Human Rights as interpreted by the Court, States have an obligation to carry out effective investigations and to take account of possible grounds of discrimination so that when such crimes are detected they do not go unpunished. States also have a positive obligation to protect the right to life of all persons placed under their jurisdiction and their right not to be subject to treatment in breach of Article 3 of the European Convention on Human Rights.
5. According to information provided by the Secretary General following his visit to the Russian Federation on 20 and 21 June 2018, the investigation into allegations of persecution of LGBTI persons in the Chechen Republic is still under way. The Committee of Ministers calls on the Russian Federation to carry out an immediate and transparent investigation into the reports of persecution of LGBTI persons in order to bring to justice those responsible and to ensure the safety of the LGBTI persons in the North Caucasus, as well as human rights defenders, journalists and other media workers reporting such violations and abuses.”

3.  Having regard to the investigating authority’s refusal to open a criminal case into the applicant’s allegations of abduction and ill-treatment and their alleged failure to carry out the investigative steps mentioned by the applicant, have the domestic authorities carried out a prompt, thorough, independent and impartial investigation in compliance with the procedural obligations under Articles 3 and 5 of the Convention? In particular, did the investigating authority take into account difficulties in collecting evidence which may have appeared in that particular case? If so, did they take any measures to overcome those difficulties?

4.  Has there been a violation of Article 14 of the Convention taken alone or in conjunction with Articles 3 and/or 5 thereof, on account of the alleged detention and ill-treatment of the applicant on the grounds of his sexual orientation and the domestic authorities’ decision not to open a criminal case into the incident?

The parties are requested to submit information about any new developments in the investigation and photographs of the applicant’s injuries which he allegedly took shortly after his release from detention.