Russia again in violation of ECHR for treatment of LGBT people 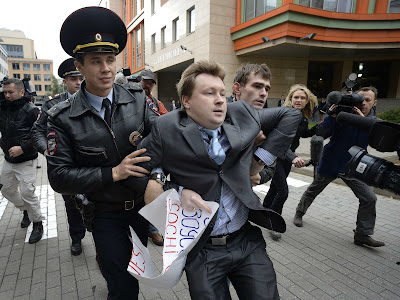 The Third Section of the European Court of Human Rights, sitting as a Committee comprised of three judges, has issued its judgment in Alekseyev and Others v Russia.

The case concerns 77 applications made to the Court between November 2015 and June 2018 that primarily concern the ban, imposed by Russian authorities, on holding LGBT public assemblies, and of the discriminatory manner in which the applicants who wished to hold these events were treated.

The Court is able to sit as a Committee of three judges (Article 26 ECHR) and may, by unanimous vote, decide on the admissibility and give a judgment on the merits of individual applications if the underlying question in the case is already the subject of well-established case law of the Court (Article 28 ECHR).

The Court decided, given the similar subject matter of all of the applications, to examine them jointly in a single judgment.

The applicants in all 77 applications complained principally of the ban on holding LGBT assemblies in Russia and of the discriminatory manner in which the national authorities had treated their applications for holding these events.


For example, in Application 9273/16 submitted on the 2nd February 2016, three applicants complained of the refusal to allow them to hold public events (such as a gay pride march) to express support for the rights and freedoms of homosexual persons in Russia, in Arkhangelsk between the 9th and 14th April 2015. The reason given for the refusal was "content-based restriction with reference to law banning promotion of homosexuality".

Judgment of the Court

In a very brief judgment, relying on its well-established case law regarding the right of LGBT people to freedom of assembly, the Court held that the ban on holding LGBT public assemblies in Russia did not correspond to a pressing social need and was therefore not necessary in a democratic society.

The Court also held that the applicants had suffered unjustified discrimination on the grounds of sexual orientation which was incompatible with the standards of the Convention.

Therefore, in respect of 76 of the applications, the Court held that there had been a breach of Article 11, and of Article 14 in conjunction with Article 11, of the Convention.

The Court, similarly, found violations of Article 13 of the Convention.

Significance of the judgment

The judgment adds to the Court's case law on the right of individuals to openly identify themselves as gay, lesbian or any other sexual minority, and to promote their rights and freedoms, in particular by exercising their freedom of peaceful assembly.

The judgment sends, yet again, the strongest message to the Russian authorities that in restricting LGBT public events they are in breach of the Convention.

Three interesting features of the judgment

One interesting aspect of this case is that Nikolay Alekseyev, the well-known gay rights activist and champion, was the lead applicant in all of the 76 jointly made applications, and the sole applicant in one application.

In a previous judgment of the Court (Zhdanov and Others v Russia), Mr Alekseyev's applications were declared inadmissible as an abuse of the right of individual application. This was because of statements that Mr Alekseyev had made about the Court and some its judges on social media. I wrote about the issue here and provided a critique of the Court's decision here.

In the present case, the Court followed the Zhdanov judgment and, on the basis that the statements made by Mr Alekseyev on social media could be considered to be connected with his applications to the Court, declared them all inadmissible as an abuse of the right of individual application (pursuant to Article 35 §§ 3 (a) and 4 of the Convention).

As in the Zhdanov judgment, then, declaring Mr Alekseyev's applications inadmissible had no material effect on the outcome of the judgment, insofar as the Court was able to deliver another strong condemnation of the interference of the Russian authorities with LGBT assemblies.

However, as in Zhdanov, a question is raised about what would have happened if (as in the single sole application) Mr Alekseyev had been the only applicant in the case? The answer to that question is that the Court would probably have declared all of the applications inadmissible and no judgment on the merits would have been issued.

This takes us back to the fundamental problems, which I outlined here, regarding the Court's approach to Mr Alekseyev. The key problem is that the Court has deprived one of the leading advocates of LGBT human rights in Russia of access to one of the few mechanisms through which to seek redress for violations of the human rights of LGBT people in Russia. In simple terms, excluding Mr Alekseyev from the Court does not only damage him, but potentially damages all of those people who benefit from a positive judgment of the Court.

I find the Court's decision to declare Mr Alekseyev's 77 applications inadmissible disproportionate and would reiterate the view of Judges Keller, Serghides, and Elósegui, expressed in Zhdanov, that the Court "exists to protect and realise" the right of individual application "for all applicants, regardless of their manners or propriety. Taking this right away from an applicant altogether should be done only in the most exceptional circumstances". I don't think these are the "exceptional circumstances" in which the Court should have used Article 35 of the Convention to declare that Mr Alekseyev was abusing his right of individual application.

One particular irony of the Court's approach is that, whilst it declared all of Mr Alekseyev's complaints inadmissible, it also relied on its 2010 judgment in Alekseyev v Russia to reach its conclusion that the other applicants had suffered violations of the Convention.

A further interesting feature of the judgment is that it was issued by a three judge Committee comprising of Alena Poláčková (Slovakia), Gilberto Felici (San Marino), and Dmitry Dedov (Russian Federation).

Judge Dedov has previously attracted the criticism that his views are "outrageously homophobic". For example, in a judgment of 2018, again concerning Mr Alekseyev, Judge Dedov, as I outlined here, made some remarks that can be considered to be homophobic, such as claiming that the Court had hitherto not considered "the fundamental rights and freedoms of parents and their children affected by the public debate on sexual orientation".

In this case, Judge Dedov obviously voted in favour of finding a violation of the Convention in respect of the applications considered.

A final, more minor, interesting point about the judgment is that it is the first ever judgment by a Committee in a case relating to sexual orientation discrimination.

The importance of this is that it shows that there is now sufficient case-law relating to LGBT freedom of assembly for the Court to deal with complaints of this kind in a more "routine" manner - that is, without a full Chamber.

The Court's developing case law is important in the context of Central and Eastern European states, where it is much needed to deal with persistent and, in some cases, rising levels of homophobia. I have discussed this, in detail, here.