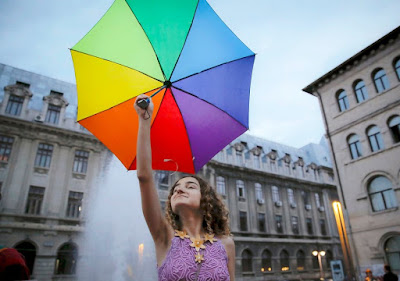 The Fourth Section of the European Court of Human Rights has communicated the case of S.K.K. and A.C.G. and Others v Romania. The case is brought by eight same-sex couples and concerns the lack of legal recognition of their relationships.

Romania does not permit same-sex couples to marry or enter into a civil union/registered partnership (see ILGA-Europe's country report for a history of recent attempts to challenge this).

The case mirrors the case of Florin Buhuceanu and Victor Ciobotaru and Others v Romania that was communicated earlier this year, which concerns 13 same-sex couples.

The applicants complain that Romanian domestic legislation does not allow them to get married or to enter into any other type of civil union and, therefore, that they are being discriminated against on the grounds of their sexual orientation and being disadvantaged by the lack of legal recognition of their relationships.

The applicants rely on Article 8 (right to respect for private and family life) taken alone and in conjunction with Article 14 (prohibition of discrimination) of the Convention.

1. Has there been a violation of the applicants’ right to respect for their private and family life contrary to Article 8 of the Convention? In particular, should they be afforded a possibility to have their relationship recognised by law (see Oliari and Others v Italy, 21 July 2015)?

2. Have the applicants suffered discrimination in the enjoyment of their Convention rights on the ground of their sexual orientation, contrary to Article 14 read in conjunction with Article 8 of the Convention, in respect of their inability to get married or enter into any other type of legally recognised union?

It is striking that the applicants do not appear to invoke Article 12 of the Convention (right to marry) even though they explicitly complain that Romanian law does not permit them to marry.

The Court has similarly not asked the parties to reflect on Article 12 even though it has asked a question explicitly related to the applicants' "inability to get married". Asking a question about the inability to marry in relation to Article 14 taken in conjunction with Article 8 of the Convention is odd given that the Court has already established that these Articles do not impose an obligation on a state to grant same-sex couples access to marriage (Schalk and Kopf, 24 June 2010, § 101).

The fact that neither the applicants nor the Court is directly addressing the inability of the couples to marry under Article 12 of the Convention is disappointing but unsurprising. The Court has made no progress towards realising the right of same-sex couples to marry and its jurisprudence has established that, in practical and effective terms, Article 12 is inapplicable to same-sex couples. Although, sadly, Article 12 appears useless to same-sex couples excluded from marriage it is important to continue to press the Court to change its position on this aspect of the Convention rights of gay people.

It would appear that the focus of the case will be on whether Romania is under an obligation to provide same-sex couples with access to a form of relationship recognition other than marriage - such as registered partnership.

In considering whether Romania is under a positive obligation to provide same-sex couples with access to legal relationship recognition the key jurisprudence of the Court is found in its judgment in Oliari and Others v Italy (21 July 2015 - for a discussion, see here) in which it held that the Italian government had "failed to fulfil their positive obligation to ensure that [individuals] have available a specific legal framework providing for the recognition and protection of their same-sex unions" (§ 185) and, therefore, had violated Article 8 of the Convention.

Taken at face value, the judgment in Oliari supports the view that Romania is under a positive obligation to provide same-sex couples with legal recognition of their relationships and, therefore, supports the applicants' complaint that they are suffering a violation of, at least, Article 8 of the Convention. However, in Oliari the Court was very careful, as Judges Mahoney, Tsotsoria, and Vehabović put it, to limit its finding of the existence of a positive obligation to Italy. Therefore, it remains to be seen whether the Court will extend this positive obligation to other Contracting States. Obviously, if the Court did so this would be a monumental step towards equality for same-sex couples in Romania, and this would have major implications for other Central and Eastern European countries.

A final point is that this case is very similar to the case of Fedotova and Shipitko v Russia, which concerns complaints by three same-sex couples about their inability to marry in the Russian Federation. That case was communicated by the Court in 2016 and I wrote about it here.