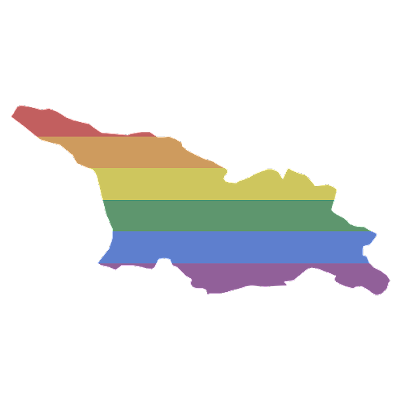 The Fifth Section of the European Court of Human Rights has issued its judgment in the case of Aghdgomelashvili and Japaridze v Georgia. The case concerns discriminatory ill‑treatment by the police on the grounds of sexual orientation and gender identity, and the absence of an effective domestic investigation of this ill-treatment.

The case was lodged over nine years ago, in January 2011, and communicated in 2014 (which I detailed here at the time).

The applicants, Ms Aghdgomelashvili and Ms Japaridze, were born in 1969 and 1979 respectively and live in Tbilisi.

Ms Aghdgomelashvili is a co-founder of the Inclusive Foundation (IF), a LGBT non-governmental organisation in Georgia.
At the time of the events complained about, Ms Aghdgomelashvili was working at the IF as a part-time programme manager, and was acting head of the organisation, whilst Ms Japaridze was working there as a programme officer in charge of office administration.

On 15 December 2009, someone rang the doorbell at the IF. As soon as the door was opened, up to 17 men and women, all dressed in civilian clothing, rushed into the office. Presenting themselves as police officers, they announced that they were there to conduct a search of the IF office.

The police officers started asking about the IF’s activities and, having realised that they had entered the premises of an LGBT organisation, suddenly became aggressive and started displaying homophobic behaviour.
The police officers started referring to the women present at the IF as “not Georgians”, “sick people” and “perverts who should receive medical treatment”.
Inaccurately assuming that a transgender person present was male, male police officers tried to make friends with her and enquired sarcastically whether the women at IF were interested in men at all.
Some of the police officers threatened to reveal the sexual orientation of the women gathered in the office to the public, and to their parents and relatives. They also threatened to hurt their family members. The officers said that they wished those in the office were men, because in that case they would use physical force on them. One of the police officers ripped a poster, which depicted two men embracing, off the wall and tore it to pieces, adding that he would burn the place down if he had matches.

Investigation of the police activity

On 9 January 2010, Ms Aghdgomelashvili and Ms Japaridze filed a complaint with the Chief Public Prosecutor’s Office (“the CPPO”), the Tbilisi city public prosecutor’s office (“the Tbilisi Prosecutor”) and the head of the General Inspectorate of the Ministry of Internal Affairs (“the General Inspectorate of the MIA”), listing the abuses of power committed by the police officers during the search of the IF office and requesting that the authorities look into the matter and respond accordingly.

On 8 February 2010, Ms Aghdgomelashvili and Ms Japaridze enquired with the General Inspectorate of the MIA and the CPPO about their complaint. They explicitly requested that the investigating authorities take into consideration the influence that the women’s perceived sexual orientation and gender identity had had on the police behaviour.

Complaint to the Court

Ms Aghdgomelashvili and Ms Japaridze complained under Article 3 (prohibition of torture) alone and in conjunction with Article 14 (prohibition of discrimination) of the Convention.

Ms Aghdgomelashvili and Ms Japaridze also complained under Article 8 of the Convention and Article 1 of Protocol No. 12 to the Convention, which the Court decided required no separate examination.

Ms Aghdgomelashvili and Ms Japaridze's principle complaints were that police officers had subjected them to ill-treatment during the search of the IF office on 15 December 2009; that no effective investigation into the police abuse had been conducted; and that those violations of the State’s negative and positive obligations had been conditioned by the relevant domestic authorities’ discriminatory attitudes towards Ms Aghdgomelashvili and Ms Japaridze's actual and/or perceived sexual orientation and/or their LGBT-related activities.
The Court's judgment

Alleged inadequacy of the investigation

The Court observed that Ms Aghdgomelashvili and Ms Japaridze lodged a criminal complaint concerning the police abuse but the Government had not shown that a single investigative act was ever undertaken, and no conclusive findings had been produced. This prohibitive delay was itself incompatible with the State’s obligation under Article 3 of the Convention to carry out an effective investigation, especially since the task of identifying the perpetrators of Ms Aghdgomelashvili and Ms Japaridze's ill‑treatment was far from arduous.

The Court stated that the protraction of the investigation exposed the domestic authorities’ long-standing inability – "which can also be read as unwillingness" (§ 40) – to examine the role played by homophobic and/or transphobic motives in the alleged police abuse.

The Court noted there had been a pressing need to conduct a meaningful inquiry into the possibility that discrimination had been the motivating factor behind the police officers’ conduct, given the well-documented hostility against the LGBT community in the country at the material time.

The Court held, therefore, that the domestic investigation into Ms Aghdgomelashvili and Ms Japaridze's allegations of ill-treatment with discriminatory intent by the police had been ineffective, since the Government had not demonstrated that a single investigative measure had ever been undertaken in practice.

As such, therefore, there had been a violation of Article 3 (under its procedural limb) taken in conjunction with Article 14 of the Convention.

The Court stated that it had "no hesitation in answering both questions in the affirmative", in the light of the police officers’ conduct during the search of the IF’s office on 15 December 2009 (§ 47).

The Court concluded that the "wholly inappropriate conduct of the police officers" during the search of the IF office on 15 December 2009 was motivated by homophobic and/or transphobic hatred and must necessarily have aroused in the applicants feelings of fear, anguish and insecurity which were not compatible with respect for their human dignity (§ 49).
Such conduct by the police reached the threshold of severity within the meaning of Article 3 taken in conjunction with Article 14 of the Convention.

As such, therefore, there had been a violation of Article 3 (under its substantive limb) read together with Article 14 of the Convention.

The Court's judgment makes an important contribution to its evolving jurisprudence on the interplay between Article 3 and Article 14 of the Convention in respect of acts of hatred (both physical and speech acts) against LGBT people.

In 2015, also in a case against Georgia, the Court held, for the first time, that ill-treatment perpetrated by private individuals against gay men and lesbians taking part in public assemblies - in the form of “violence, which consisted mostly of hate speech and serious threats, but also some sporadic physical abuse” - created “fear, anxiety and insecurity” severe enough to reach the relevant threshold under Article 3 taken in conjunction with Article 14 of the Convention (Identoba and Others v Georgia, § 79). On this basis, the Court found that the failure of national authorities to conduct effective investigations into these episodes, with a view to unmasking “the bias motive” and identifying “those responsible for committing the homophobic violence”, meant that they fell short of their procedural obligation under Article 3 taken in conjunction with Article 14 (Identoba and Others v Georgia, § 80).

The significance of the Court's previous jurisprudence was that it established that the Convention obliges national authorities to explicitly investigate bias-motived crimes committed on grounds of sexual orientation, because not to do so would mean that “prejudice-motivated crimes would unavoidably be treated on an equal footing with ordinary cases without such overtones, and the resultant indifference would be tantamount to official acquiescence to or even connivance with hate crimes” (Identoba and Others v Georgia, § 77).

The Court's willingness to extend to LGBT people the protection of Article 3 taken in conjunction with Article 14, which began as recently as 2012 (X v Turkey), is of vital importance and significance. Aghdgomelashvili and Japaridze is a further stage on the Court's journey to securing the human dignity of LGBT people in a way that is consistent with the aims of the Convention.

"Sexual Orientation Discrimination and Article 3 of the European Convention on Human Rights: Developing the Protection of Sexual Minorities"

In 2012, the European Court of Human Rights held, for the first time, that the discriminatory treatment of an individual on the grounds of his sexual orientation amounted to a violation of art.3, alone and in conjunction with art.14, of the European Convention on Human Rights. This judgment is highly significant given that individuals in Europe have been arguing since 1959 that forms of ill-treatment based on sexual orientation amount to a violation of art.3 of the Convention. In this article we provide a critical analysis of the evolution of the Court’s art.3 jurisprudence in order to assess the ways in which this has developed the protection of sexual minorities in Europe. We identify major gaps in this protection, most notably in respect of asylum, and argue that the Court’s art.3 jurisprudence should be further evolved to address these. Using the example of same-sex marriage, we conclude with a consideration of how sexual minorities might better and more creatively use art.3 in the future to address discrimination against them.

"Sexual Orientation Equality in Central and Eastern Europe: The Role of the European Convention on Human Rights"