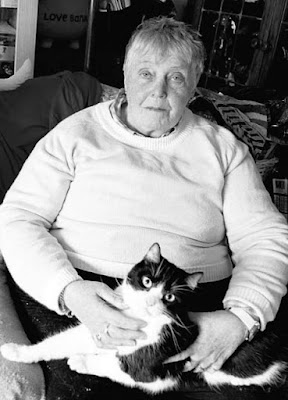 Mary Cunningham Simpson, 1947-2021
Mary Cunningham Simpson, the pioneering lesbian campaigner who fought for the legal and human rights of same-sex couples in the UK, sadly passed away yesterday.
Although now not widely remembered for her gay rights work and achievements, Mary was, in the 1980s, at the forefront of a human rights campaign to challenge laws that enabled same-sex couples to be discriminated against.
An incredibly brave individual, Mary was the first woman to take a case to Strasbourg under the European Convention on Human Rights in an attempt to gain legal protections for cohabiting same-sex couples. This was at a time when, in the UK, same-sex couples had no legal protections for their relationships.
Although Mary’s case in Strasbourg was unsuccessful, it provided an important basis for future cases that ultimately led to a change in the law both in the UK and at the European level.
Mary’s case in the English courts 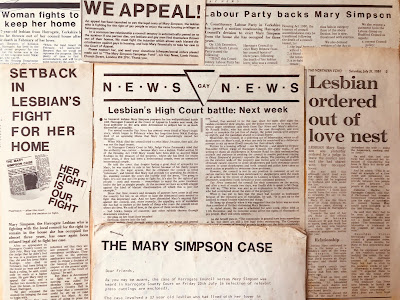 Mary’s human rights campaign began when her female partner, Nicky, with whom she lived, died in 1984.
Mary and Nicky had lived together for nearly three years in a council house in Harrogate, of which Nicky was the secure tenant. When Nicky died, Harrogate Borough Council sought to evict Mary from the property.
At that time, English law made provision for a person to succeed to a secure tenancy if they had lived with the deceased tenant “as husband and wife”. Mary claimed that she and Nicky had lived together as if they were a married couple since they ran a joint household, shared all expenses, slept together in the same bed, and had an intimate relationship. Mary’s general medical practitioner stated at the time that the couple had lived together in a lesbian relationship as “man and wife” and this had been well known and accepted in the area.
On this basis, Mary refused to leave her home and Harrogate Borough Council commenced possession proceedings against her. Harrogate County Court found in favour of the Council, on the basis that, unlike the surviving partner of a different-sex couple, Mary had no legal right to succeed to Nicky’s tenancy.
Gay News reported at the time that Judge Victor Zermansky, in the County Court, had a great deal of sympathy for Mary and hinted that she had grounds for appealing his decision. Mary told me that the County Court “wasn’t too bad” and that they essentially told her “Oh no, we can’t do this”, and “You’ll have to go to the appeal court”.
Mary did go to the Court of Appeal – which she told me was a “horrendous” experience – where she argued that the existence of the word “as” in the phrase “live together as husband and wife” made the law on succeeding to secure tenancies applicable to “unions which gave the appearance of two people living together in a kind of matrimonial state” and that must be taken to include same-sex unions.
Mary’s claim, which sought to establish that cohabiting same-sex couples (who were not then legally permitted to marry) were analogous to unmarried different-sex couples, who “live together as husband and wife”, can be seen as one of the earliest attempts to establish that rights and benefits associated with marriage should extend to partners of the same sex.
The Court of Appeal dismissed Mary’s claim, stating that ordinary men and women would not think there was any resemblance between a homosexual union and the state of living as husband and wife.
Mary’s ECHR case

Mary decided to bring a case under the European Convention on Human Rights, arguing that she had been denied the right to respect for her private and family life, as well as for her home (under Article 8 of the Convention) and that she had been discriminated against (under Article 14 of the Convention).
The European Commission of Human Rights dismissed Mary’s application, stating that a same-sex relationship fell outside of the scope of the “family life” limb of Article 8, would not consider the complaint under the “private life” limb of Article 8, and rejected the complaint under the “home” limb of Article 8.
Mary’s treatment by the Commission at that time was not atypical, since complaints about discrimination on the grounds of sexual orientation were routinely rejected.
In this case, the Commission recognized that the treatment accorded to Mary was different from the treatment she would have received if the partners had been of different sexes, but that this difference in treatment was the result of legislation designed to “protect the family” (meaning families made up of different-sex couples) and was therefore justified.
The type of discrimination that Mary endured existed until it was eventually successfully challenged in the UK in 2002, and in Strasbourg in 2003.
A lesbian rights hero
I had the great privilege of meeting Mary in 2015, at her home, when I conducted an oral history interview with her for the Going to Strasbourg project. After this interview, we stayed in touch, became firm friends, and spoke many times on the telephone.
Mary was an incredibly lovely person. She was also an incredibly brave person. She was, to me, a hero and an inspiration; a shining example of someone who deeply cared about, and spoke out for, human dignity.
The world should remember Mary Simpson, and all she stood for. She campaigned for human rights that we in the UK now enjoy, but many others around the world do not. She stood up to people who told her she was worth less than others, and that she mattered less than they did.
Although Mary had been treated very cruelly by others she responded not with anger or bitterness, but with a quiet determination to live the life she wanted to live. She was kind to others, and had a deep-seated desire to live in a society that cherished the freedom for everyone to be themselves. As she told me: “I’m me. There are no two people like me. I am me. I will fight for my rights and I will keep on fighting until everybody gets their share of their rights”.
These words from Mary are ringing in my ears today:
You’ve got to keep chipping away at the paintwork, bit by bit, until you break through. I’m proud I did it. They walk about with gay pride, but I’ve got pride inside. I’m proud that I stuck my neck on the block and tried to get something done. It makes people realize that we can’t be trodden on. Because a lot of people think gays are the riff-raff of society, they’re the queer lot of society…and I thought, no, I’m not having it, I’ve got to do something to make people realize we’re still human beings. No matter which side of the fence we sit, we’re still human beings. I just can’t understand why people have to be so horrible to people, that’s what gets me. Because if you don’t do what they want, or toe the line, what do you do? You become a rebel. But I wasn’t a rebel without a cause, I had a cause. I always make sure I’ve got a cause before I’m a rebel, because that way you’re trying to help other people. That’s what I’ve always been trying to do, is help other people. If I’ve helped somebody on the way, you know, I’m glad. It’s better to do a good turn than a bad turn. It was hard going, but I think I have done something.
Mary did do something, and she did it with courage, with conviction, with passion, and with warmth.
Mary spent her final years in Calne, Wiltshire. If she was known for one thing in her local area it was for her love of animals, and particularly for her love of cats. She had a life-long preoccupation with taking in any stray animal and giving it a loving home. Home, perhaps because of her history, was very important to Mary.
Find out more about Mary 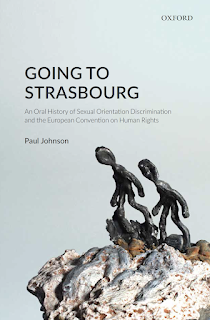 I have uploaded pages from Going to Strasbourg on Mary's ECHR case here, and also the pages containing her oral history account of the case here.
Hear Mary talk about the ECHR case, as well as Dr. Loveday Hodson's analysis of it, in the Going to Strasbourg podcast (relevant section starts at 08.47).
Read the judgment of the Court of Appeal on Mary's case here.
Read the decision of the European Commission of Human Rights on Mary's case here.
Postscript (20 August 2021)
Since writing this blog post, I have been so pleased to see Mary's pioneering work getting wider recognition:
The Wiltshire Gazette and Herald republished my blog post here;
Pink News published their own very nice tribute here;
and the Canadian Broadcasting Corporation (CBC) produced a piece for radio about Mary here (the broadcast is available in full here, with the relevant section commencing at 09:35).