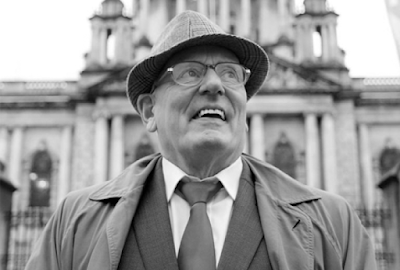 On the fortieth anniversary of one of the most important LGBT+ legal victories I was joined by a fantastic group of speakers, Lord Lexden OBE, and Jeffrey Dudgeon MBE, to discuss the importance and enduring significance of Dudgeon v the United Kingdom.
The Dudgeon case concerned the complete criminalisation of consensual same-sex sexual acts between adult men in Northern Ireland and the judgment of the European Court of Human Rights on 22 October 1981 led to the enactment of the Homosexual Offences (Northern Ireland) Order 1982 which partially decriminalised "homosexual acts".
An audio recording of the event, capturing the rich and profound contributions, is available to listen to here (via Soundcloud) or here (via Google Drive), and details of the contributions are as follows:
Here is the text of my opening remarks:
A very good evening everyone,

I’m Paul Johnson and it is my great pleasure to welcome you to this event, to celebrate the anniversary of one of the world’s most important legal victories for LGBT+ people.

Today is exactly forty years since the European Court of Human Rights issued its judgment in the case of Dudgeon v the United Kingdom.

On 22 October 1981, the European Court of Human Rights agreed with Jeffrey Dudgeon that the complete criminalization of same-sex sexual acts between adult men in Northern Ireland constituted a violation of his human rights as protected by the European Convention on Human Rights.

In reaching this judgment, the European Court of Human Rights ushered in a new era of “gay rights” in which law ceased to be only a source of oppression for gay people but also became a viable and realistic means to seek protection from oppression.

The importance of the judgment in Dudgeon cannot be overstated and this event gives us an opportunity to understand the wide-ranging impacts that it has had and continues to have.

To help us understand the significance of the Dudgeon case we have an amazing set of speakers who are each going to reflect on the judgment, and give us different insights and perspectives on it, as well as discuss contemporary issues relevant to it – I’ll introduce the speakers in turn in due course.

We are also blessed to have Lord Lexden, Deputy Speaker of the House of Lords, with us to open this event.

And we also have the great man himself, Jeffrey Dudgeon, here, who will speak later, and will answer any questions you have at the end.

Before I hand over to Lord Lexden, I did want to say that the late, great human rights barrister, Jonathan Cooper, was due to speak at this event, and was very excited to do so. As many of you will know, Jonathan very sadly died recently. His passing has been widely mourned, and widely commented on as an enormous loss to LGBT rights. I want to note Jonathan’s absence here, say how much I miss him, and remember all that he did for LGBT rights.

And now, I really am delighted to introduce Lord Lexden, who has a lifetime of experience and knowledge of Northern Ireland, which is, of course, the part of the UK where the Dudgeon case originated. Alistair worked as an academic historian at Queen's University, Belfast between 1969 and 1977 and, among other activities, was an archivist in the Public Record Office of Northern Ireland. Since that time, Alistair has regularly researched, written about, and spoken on a wide range of issues related to Northern Ireland and, since he took his seat in the House of Lords in 2011, Northern Ireland has been a principal focus of his parliamentary activities.

So, there could be no one better to open this event, and I'll hand over to Alistair now.

Here is the text of the opening remarks by Lord Lexden OBE:

The first thing I have to do—and I do it with great enthusiasm—is to pay tribute to Paul Johnson for having conceived the happy idea of marking the 40th anniversary of Jeff Dudgeon’s Strasbourg triumph, and for organising this event with the thoroughness which seems to be his middle name. No one has a greater commitment than Paul to advancing the cause of LGBT rights, and also to honouring those who suffered grievously in past generations. Legislation is before the Lords at the moment, which, thanks to amendments crafted by Paul, will enable many more people and their families to wipe away the stains left by hateful laws that have now been repealed.

Not the least of the benefits for which we have to thank Paul is his publication of Jeff’s moving first-hand account of his life as a gay man in Belfast in the 1970s, and of the Strasbourg case itself. It is readily available for all time in Paul’s book, Going to Strasbourg, published in 2016.

Paul has referred to my interest in Northern Ireland, which was rather greater forty years ago than it is now. Lacking a diary, I cannot recall my work then in detail. But I am clear that in the Tory ranks at Westminster, the case for extending the 1967 Act to Northern Ireland stirred no interest whatsoever. It never came up in my conversations with Airey Neave, with whom I worked for two years before his murder; though, as a man of great humanity, I do not think he would have been unsympathetic.

The Thatcher government, formed in 1979, specifically ruled out action to diminish the oppression of the criminal law on gay people in Northern Ireland. That is the simple, central fact that needs to be borne constantly in mind in assessing the significance of Jeff’s victory. It, and it alone, extracted legislation from an indifferent administration, though there were notable elements within it—including Jim Prior, then the Northern Ireland Secretary—who gladly changed course in the light of the Strasbourg judgement.

Almost exactly one year later, on 25 October 1982, the Homosexual Offences (Northern Ireland) Order was passed by the House of Commons, with all the Province’s MPs opposing it. In a book of memoirs, Matthew Parris recalls how he overcame considerable nervousness to speak in favour of the legislation. In his brief, moving speech, he said: “Seldom does so small a measure, debated in so short a time and brought at such a late hour, touch so deeply the lives of so many thousands of people in the United Kingdom.” It was important moment in Matthew’s life. His emergence as a gay rights campaigner was to follow soon afterwards . Many lives throughout the country would be touched and assisted by his work in future years.

Winston Churchill said many things in 1940, including this: “When the perspective of time has lengthened, all stands in a different setting”. The Dudgeon case defies that Churchillian wisdom. It stands in exactly the same high setting today as it did forty years ago—perhaps even higher, when the long succession of subsequent developments which it helped make possible is taken into account.

Whenever I think of Jeff Dudgeon, the name of another Ulsterman springs into my mind. Harford Montgomery Hyde was a very liberal-minded Ulster Unionist MP between 1950 and 1959. Though not gay himself, he courted acute controversy in Protestant Belfast by calling repeatedly for the repeal of anti-gay laws. He did not make life easy for himself. “Mr Hyde”, said Billy Douglas, a legendary Ulster Unionist official, “are you mad? You have put a list of great homosexuals at the back of your book on Oscar Wilde with William of Orange at the top of it.” He was deselected in 1959. Appropriately, Jeff has written a little book about this courageous man who, like him, defied abuse and hostility to demand human rights for gay people.

May I end with a personal reflection—one which Jeff, I think, shares? I have always felt that the interests of gay people are not well-served by the existence of devolved parliaments within the United Kingdom. There should be uniform standards of human rights throughout a unitary state. I often seek Paul Johnson’s counsel on this point. Throughout the 1980s, I hoped that it might be possible to prevent the return of wide law-making powers to Stormont, and so stop the devolution bandwagon in Scotland and Wales. Gay people should at all times have exactly the same rights and freedoms in Belfast and Birmingham. If that had been achieved, it would have been a fine sequel to Jeff’s great victory on this day forty years ago.

The flyer produced for the event is available here.