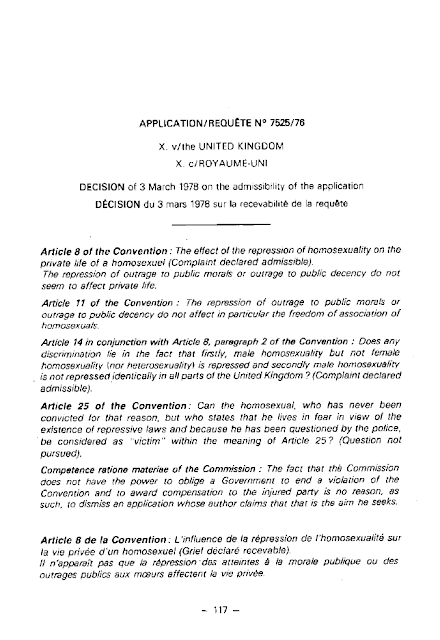 This month marks the 40th anniversary of the European Commission of Human Rights declaring, in 1978, the application in Dudgeon v the United Kingdom admissible.

This was a very significant event which paved the way to the UK Parliament partially decriminalising sexual acts between men in Northern Ireland in 1982.

The application to the Commission was made by Jeffrey Dudgeon in May 1976, who was then a thirty-year-old shipping clerk resident in Belfast.

Mr Dudgeon stated in his application that he "had been consciously homosexual from the age of 14 years" and, from the "onset of homosexual consciousness", had "experienced fear [which] had increased through adulthood and was directly caused by the existence of offences against homosexual behaviour in the criminal law".

He complained to the Commission about the blanket prohibition of male homosexual acts in Northern Ireland enforced through law regulating buggery and gross indecency between males. He further complained about the common law offences, insofar as they related to homosexuality, of conspiracy to corrupt public morals and conspiracy to outrage public decency.


The Commission declared inadmissible Mr Dudgeon’s complaint about the common law offences. However, it took the step - bold, in those days - of declaring admissible the complaints concerning the laws in force in Northern Ireland prohibiting sexual acts between men.

In 1980, the Commission broke with its previous case law and reached the conclusion that the prohibition on male same-sex sexual acts between persons over 21 years amounted to a violation of Article 8 of the European Convention on Human Rights.

As a result of the Commission’s opinion, Mr Dudgeon became the first person to ever reach the European Court of Human Rights with a complaint about sexual orientation discrimination.

In 1981, the Court held that the existence of law prohibiting male homosexual acts was a violation of Article 8 of the Convention.

The result of Dudgeon

The Court’s judgment in Dudgeon had an extensive impact: it necessitated the partial decriminalization of male homosexual acts in Northern Ireland in 1982, compelled similar law reform in jurisdictions outside the UK to which the UK had extended the Convention (for example: Guernsey, Jersey and the Isle of Man), underpinned further judgments by the Court against states that enforced a total prohibition of male homosexual acts (for example, in the Republic of Ireland, and Cyprus), and shaped jurisprudence outside of Europe (such as in the United States).

Dudgeon remains the "gold standard" in setting the limit on states to operate a total prohibition on same-sex sexual acts. It means that none of the 47 states in the Council of Europe can return to such a prohibition. And it also acts as the basis for arguing that other states around the world should decriminalise same-sex sexual acts.

Mr Dudgeon was awarded an MBE in 2012 for services to the LGBT community in Northern Ireland. He is currently a Belfast City Councillor, sitting as a member of the Ulster Unionist Party.

He continues to play an active and forthright role in LGBT politics and, most recently, has worked on a Bill to allow the UK Parliament to make same-sex marriage lawful in Northern Ireland, which has the support of key peers in the House of Lords.