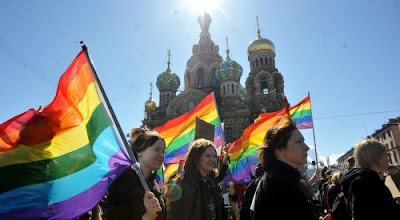 The Third Section of the European Court of Human Rights has today issued its judgment in Alekseyev and Others v Russia. The case concerns 51 applications against the Russian Federation by applicants who, between 2009 and 2014, were refused approval to hold LGBT public assemblies (gay pride marches).

The applicants complained about the ban on holding LGBT assemblies and of the discriminatory manner in which the national authorities treated their applications to hold these events. They also complained of the absence of effective domestic remedies in respect of the alleged violations of their right to freedom of assembly.

The applicants relied on Articles 11, 13 and 14 of the Convention.

The Court found that 44 of the applications were inadmissible as they had not been lodged within six months of the authorities’ decision not to approve a public LGBT event. The rest of the complaints were declared admissible.


The Court reached its conclusion by, in essence, reiterating its findings in Alekseyev v Russia from 2010. In that earlier judgment, the Court found that the Moscow authorities’ decision to prohibit LGBT events, and thereby restrict the applicant’s freedom of assembly, was in violation of the Convention.

I have written about Alekseyev (2010) many times, and specifically about the lack of progress made by the Russian Federation in implementing the judgment. The judgment remains under the enhanced procedure for execution and, for the last eight years, the Russian Federation has done nothing to implement it. The last time the Committee of Ministers examined the status of the judgment the Deputies stated that "the situation does not attest to any improvement".

Therefore, whilst the Court's judgment today is very welcome, it adds little to solving the key problem which is that the Russian Federation will not address the effective ban that Russian authorities place on gay pride marches.

In a Concurring Opinion, Judge Dedov (judge of the Russian Federation) made some remarks that will be widely understood as homophobic.

Judge Dedov is critical of the Court's approach to adjudicating sexual orientation discrimination cases in Russia. For example, he states that in the recent case of Bayev and Others v Russia - which concerned "homosexual propaganda" laws -  "the Court did not consider the fundamental rights and freedoms of parents and their children affected by the public debate on sexual orientation". For Judge Dedov this and other deficiencies in the Court's case-law "create the impression that the promotion of homosexual relationships, especially to minors, could be considered an issue for public debate" - which, clearly, he thinks it should not be.

Judge Dedov believes, he says, "that compromise and social harmony could be found on the basis of mutual respect for human rights". What would this mutual respect look like? It would be, says Judge Dedov, a situation in which minorities do not "seek to promote their personal way of life, but rather seek recognition that their civil rights should be equally respected and protected by the State".

What does this mean? Well, according to Judge Dedov he is "referring to the right to create family relationships that differ from the usual notion of a union between man and woman". These "unusual" relationships could "be the starting‑point for protecting all the other needs usually arising in relation to any family members".

Judge Dedov explains that this is why he voted in favour of a violation of the Convention: it was because "some of the events organised by the applicants were devoted to the protection of their rights and not to the promotion of sexual relationships".

Such a view of homosexuality has a long pedigree and underpins the introduction of "homosexual propaganda" laws in Russia and elsewhere that are designed to suppress public discussion of homosexuality. Such discussion is seen as wholly negative because it is imagined to corrupt "normal" heterosexual society by promoting "deviant" relationships.

This is not the first time that Judge Dedov has made homophobic comments - I detailed his previous similar comments in an earlier post. As I've said before, I welcome Judge Dedov making his views explicit because it reveals his hostility to gay people and, I think, provides an insight into what LGBT people face if they live in the Russian Federation.