Was an LGBT organization denied a fair trial when challenging a homophobic teacher of religion? Court communicates new case against Croatia 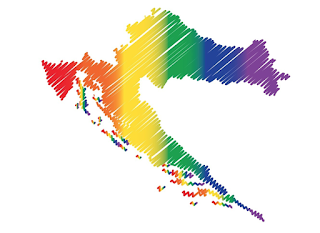 The First Section of the European Court of Human Rights has communicated the cases of Dario Krešić v Croatia and Lezbijska Grupa Kontra v Croatia.

The application made by Lezbijska Grupa Kontra concerns the right of access to the Supreme Court of Croatia in a non-discrimination case and the overall fairness of it proceedings.

The application concerns the Prevention of Discrimination Act (Zakon o suzbijanju diskriminacije, Official Gazette no. 85/2008) which provides for an appeal of points of law with the Supreme Court in all cases concerning allegations of discrimination.

Lezbijska Grupa Kontra, an association involved in the promotion and protection of LGBT rights, lodged a class action against a religion teacher of an elementary school, because she had allegedly told the children during class that homosexuality was “an illness”.
After the first- and second‑instance courts rejected Lezbijska Grupa Kontra’s claim, the Supreme Court declared its subsequent appeal on points of law inadmissible, although the relevant legislation always allowed an appeal on points of law in non‑discrimination cases.
Complaint to the Court
Lezbijska Grupa Kontra complains, under Article 6, taken alone and in conjunction with Article 14 of the Convention and Article 1 of Protocol No. 12 to the Convention, about the unfairness of the domestic proceedings, including the Supreme Court’s allegedly arbitrary rejection of its appeal on points of law.
Questions to the Parties
The Court has asked the parties the following questions:
1. Has there been a breach of Article 6 § 1 of the Convention on account of the Supreme Court’s decision to declare inadmissible the applicant’s appeal on point of law? In particular:

a) was that decision arbitrary, unforeseeable or excessively formalistic so as to unduly restrict the applicant’s access to court; and/or

b) was it the consequence of the Supreme Court’s inconsistent practice on the matter, in breach of the principle of legal certainty (cf. Supreme Court judgment Rev-1003/2012-2 and Rev-3235/2014)?

2. In the negative, did the applicant have a fair hearing in the determination of its civil rights and obligations, in accordance with Article 6 § 1 of the Convention? In particular:

a) was the principle of equality of arms respected as regards the failure of the first-instance court to hear witnesses proposed by the applicant; and

b) has the hearing in the present case complied with the requirements of publicity?

3. Was the length of the civil proceedings in the present case in breach of the “reasonable time” requirement of Article 6 § 1 of the Convention?

4. Has the applicant suffered discrimination, contrary to Article 14 of the Convention read in conjunction with Article 6 and/or Article 1 of Protocol No. 12? In particular, was the manner in which the domestic proceedings were conducted the consequence of discriminatory attitudes towards the LGBT community?