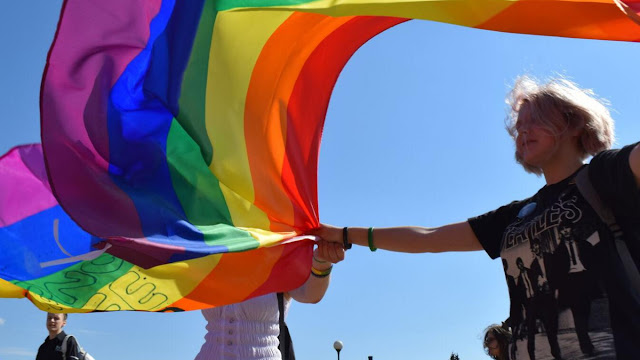 The Third Section of the European Court of Human Rights has issued its judgment in Berkman v Russia. The case concerns the failure of police officers to ensure that an LGBTI event disrupted by counter-demonstrators proceeded peacefully, and the unlawful arrest of the applicant, Ms Berkman, at the event.

On 27 September 2013 a group of LGBTI rights activists informed the St Petersburg authorities of their intention to hold a meeting to mark Coming Out Day on 12 October 2013 at the Field of Mars, a large square in the city centre. About 150 people were expected to attend the event.

On 30 September 2013 the authorities forwarded the information about the upcoming event to the police and reminded the organisers of the meeting that they would be held liable under domestic law for inciting hatred and enmity on account of ethnicity, language, origin and religious beliefs or for promoting “non-traditional” sexual relationships to minors.

The police deployed around 540 police officers, including officers from special-purpose units, to ensure public order during the meeting. It appears that the enhanced security was ordered in the light of anticipated clashes with counter-demonstrators.

At about 1 p.m. on the day of the event Ms Berkman arrived at the site to take part in the preparation of the meeting. According to her, the participants (about 20 or 30 people) were unable to gather, because the place was blocked by more than 100 aggressive counter-demonstrators. Many of them were in national costumes and armed with whips. They insulted the participants in the meeting, and pushed and punched them.

The police officers arrested several counter-demonstrators, took them to a police bus parked nearby and then released them. The released counter‑demonstrators continued their verbal attacks and physical pressure on the LGBTI activists.

At 1.55 p.m. police officers surrounded a group of twelve demonstrators, including Ms Berkman, and stated that they had breached public order by using foul language in a public place. Then the officers ordered them to proceed to a police bus and took them to central police station no. 28 in St Petersburg.

The Court that subsequently dealt with Ms Berkman case - the Dzerzhinskiy District Court of St Petersburg - terminated administrative proceedings against her on 8 November 2013 for lack of evidence of her guilt.

Domestic proceedings against the police

Ms Berkman lodged a civil claim with the Vasileostrovskoiy District Court of St Petersburg against the domestic authorities. She challenged the lawfulness of her arrest and detention at the police station. Later, on an unspecified date, she extended her claim, alleging that the authorities had failed to ensure the personal safety of the participants in the public meeting of 12 October 2013.

Several iterations of these claims in the domestic courts, including the Supreme Court of Russia, failed.

Ms Berkman, relying on Article 5 § 1 of the Convention, claimed that her administrative arrest and subsequent detention at the police station had been arbitrary and unlawful.

She further complained, relying on Article 11 taken alone and in conjunction with Article 14 of the Convention, that the domestic authorities had failed to enable the public meeting marking Coming Out Day to proceed peacefully.

Ms Berkman further complained, under Article 14 taken in conjunction with Article 5 § 1 of the Convention, that she had been arrested on the grounds of her views in support of LGBTI people.

The Article 11 and Article 14 complaints

Failure of the police to facilitate the event

The Court was satisfied that the St Petersburg authorities did not ban the public meeting in support of the LGBTI community, where Ms Berkman intended to participate and that, being aware of the risks associated with the event, they dispatched considerable number of police officers to the scene of the demonstration.

The Court noted the "passive conduct of the police officers" and "that they did not consider it necessary to facilitate the meeting" (§ 53).

The Court stated that it was "unsatisfied with such [an] approach" and reiterated that "participants must [...] be able to hold the demonstration without having to fear that they will be subjected to physical violence by their opponents" (§ 54). "Genuine, effective freedom of peaceful assembly", the Court said, "cannot, therefore, be reduced to a mere duty on the part of the State not to interfere" (§ 54).

In respect of the positive obligations of the state, the Court said these should be assessed in the light of the subject matter of the assembly. The Court said such positive obligations "were of paramount importance in the present case, because the applicant as well as other participants in Coming Out Day belonged to a minority" (§ 55). "They held views that were unpopular in Russia", the Court said, "and therefore were vulnerable to victimisation" (§ 55).

The Court concluded that the authorities failed to duly facilitate the conduct of the planned event by restraining homophobic verbal attacks and physical pressure by counter-demonstrators.

The Court stated: "As a result of the passive attitude of the police authorities, the participants of the event fighting against discrimination on the grounds of sexual orientation became themselves the victims of homophobic attacks which the authorities did not prevent or adequately manage" (§ 57).

On this basis, the Court considered that the domestic authorities failed to comply with their positive obligations under Article 11 of the Convention, taken alone and in conjunction with Article 14.

The arrest of Ms Berkman

The Court observed that police officers arrested Ms Berkman and other participants of the meeting on the grounds of the alleged use of foul language. In preventing Ms Berkman's participation in the event, this action of the police amounted to an interference with her rights enshrined by Article 11 of the Convention.

The Court regarded Ms Berkman's arrest to fall short of being lawful (on account of a lack of reasons and legal grounds for her arrest) and, accordingly, the interference in question was unlawful.

Moreover, given Ms Berkman's conduct was clearly of a non-violent nature, the Court considered that the reasons relied upon by the domestic authorities for the arrest were insufficient to justify that she was prevented from continuing to participate in the event.

The Court therefore concluded that there had been a violation of the State’s negative obligations under Article 11 of the Convention taken alone.

However, the Court stated that it could not "find it established that the police officers arrested only the participants of the public event and disregarded the breaches of public order by their opponents" (§ 63).

On this basis, the Court stated that it could not conclude that the interference in question affected Ms Berkman’s rights guaranteed by Article 14 of the Convention and, as such, that there had been no violation of Article 14 taken in conjunction with the negative obligations under Article 11 of the Convention.

The Court dealt with this very briefly.

According to Ms Berkman's arrest record, she was taken to the police station for the purpose of drawing up an administrative-offence report.

The Court observed that domestic law provided that a suspected offender may be brought to a police station for the purpose of drawing up an administrative-offence report only if such a report could not be drawn up at the place where the offence was detected.

The Government, however, had not argued that in Ms Berkman's case drawing up such a report at the site of the protest was impossible. Moreover, the domestic authorities had never assessed in a meaningful manner the necessity of the applicant’s transfer to the police station.

On this basis, the Court found a breach of the applicant’s right to liberty on account of a lack of reasons and legal grounds for her arrest and, as such, a violation of Article 5 § 1 of the Convention.

The Court did not consider it necessary to examine the merits of Ms Berkman's complaint under Article 5 § 1 of the Convention concerning her delayed release from the police station.

The Court also considered that there was no need to examine separately the merits of the complaint under Article 14 taken in conjunction with Article 5 § 1 of the Convention that Ms Berkman had been arrested on the grounds of her views in support of LGBTI people.

This judgment is a further reiteration of the Court's now established principle that domestic authorities are under a positive obligation to ensure that LGBT+ people can exercise their right to freedom of peaceful assembly in circumstances free from homophobic hatred.

Police officers must not be "passive" in the face of conflict between LGBT+ people and homophobic protestors, but must actively facilitate the freedom of peaceful assembly of LGBT+ people.

As the Court said, police passivity results in those people who are fighting against discrimination on the grounds of sexual orientation themselves becoming the victims of homophobic attacks.

In the context of Russia, the judgment further highlights the risks to LGBT+ people, the failure of the state to protect them, and the ongoing relevance of the Convention system for redress. Of course, the ongoing failure of the Russian government to execute the Court's LGBT-related judgments is a significant problem. For the Convention system to work, political pressure is needed by the bodies of the Council of Europe to ensure that Russia takes action to be compliant with the Convention.

One intriguing aspect of this judgment is that the Court was prepared to find a violation of Article 14 (prohibition on discrimination) in respect of the failure of the police to facilitate the event, but not in respect of Ms Berkman's arrest. Clearly, in respect of the public event, the Court was satisfied that Ms Berkman was made the victim of homophobic attacks because of a failure of the police and, therefore, the violation of positive obligations under Article 11 had a discriminatory element. But the Court was not satisfied that Ms Berkman had been arrested for discriminatory reasons - that is, on grounds of sexual orientation. The key issue for the Court was that it could not find any evidence that the police officers had only arrested the participants of the LGBTI event or disregarded the breaches of public order by their opponents. On this basis, the Court would not find a discriminatory element to the negative violation of Article 11. It does appear that the Court assessed video and other materials to reach this conclusion.

Generally, this is a very positive judgment that strengthens the Court's jurisprudence on the freedom of peaceful assembly of LGBT+ people.